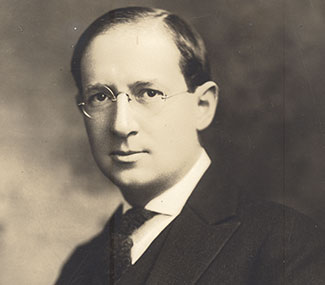 Leo Buerger, MD was born in Vienna, Austria in 1879. His family moved to the United States when he was one year old. After receiving his bachelors and masters degrees from the City College of New York and Columbia University, he obtained his medical degree from the College of Physicians and Surgeons of Columbia University in 1901. Following a year-long internship at Lennox Hill Hospital in New York, and another year as assistant pathologist at Mt. Sinai Hospital, also in New York, Dr. Buerger spent the next three years as a surgical intern again at Lennox Hill Hospital.

In 1905, he returned to Europe where he served as a voluntary assistant at the surgical department in Breslau, Germany, and upon his return a year later to New York, he entered private practice. In 1908, Dr. Buerger wrote a well-known article in The American Journal of Medical Science: "Thromboangiitis Obliterans: A Study of the Vascular Lesions Leading to Pre-Senile Spontaneous Gangrene."

We now know this disease as "Buerger's Disease." This remained a subject of great interest to him for over two decades. In 1906, Buerger began to improve the cystoscope and presented his instrument in 1909. F. Tilden Brown, also from New York, wrote to say he was quite impressed by this instrument, particularly since it was developed "on this side of the Atlantic" and we all have "reason to be proud." It took some time before other urologists found value in Dr. Buerger's instrument, but he soon worked with Tilden Brown to design the Brown-Buerger cystoscope, produced by American Cystoscope Makers, Inc. of New York. Despite the initial cynical attitude by many of his colleagues towards his cystoscope, Dr. Buerger became professor of urologic surgery at the NY Polyclinic in 1917 and continued to refine his instrument—which eventually became the workhorse of American urologists. It remained the leading cystoscope instrument in the States until the fiberoptic illumination and modern lens systems replaced it in the 1970s.

A prolific writer, Buerger wrote contributions to differentiate streptococci and pneumococci, reported on the therapy of tetanus with the new tetanus antitoxin and even dabbled in the area of blood transfusions.

After a bitter divorce in 1929, he moved to Los Angeles (L.A.) where he eventually got remarried. Dr. Buerger was appointed professor of urology at the College of Medical Evangelists but had difficulty becoming established. At a local meeting, he announced that his reason for coming to L.A. was to teach the local urologists. When Dr. Buerger returned several years later to New York, he was not allowed on the staff at Mt. Sinai, and he gradually drifted into relative obscurity, working at small, private hospitals. Dr. Buerger died in New York City in 1943.