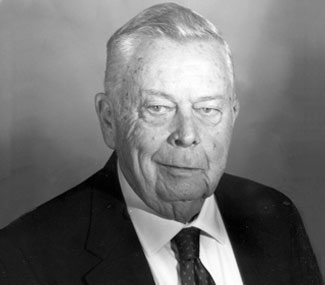 Donald F. Gleason, MD, PhD was born in Spencer, Iowa on November 20, 1920. His family moved to Litchfield, MN in 1925. He graduated from Litchfield High School in 1938 and enrolled in the University of Minnesota premedical program. Dr. Gleason earned his medical degree in 1944 in the Army Specialized Training Program at the University of Minnesota. He completed his internship at the University of Maryland Hospital. There, he met Nancy Breitung, and the two were married a short time later; they would stay inseparable for 60 years. Dr. Gleason rejoined the Army Medical Corps in 1945 and served as psychiatrist, transport surgeon, dermatologist, and VD clinician before being discharged in 1947. He then began a pathology residency in the combined Veterans Administration University program in Minneapolis. He spent two happy but ultimately unsuccessful years in Paris, France from 1950-51 studying art and honing his already advanced skills. He returned to Minnesota where he passed his anatomic and clinical pathology boards in 1952. Dr. Gleason served as chief of laboratory in the VA Hospital between 1954 and 1975 and then obtained his PhD from the University of Minnesota in 1966.

As chief of laboratory, Dr. Gleason joined the VA Cooperative Urological Research Group study of prostate cancer. With them, he devised a grading system based on the increasing disorganization of the histologic structure of the prostate cancers. The histologic grades were illustrated with photomicrographs and Dr. Gleason's drawings, which were easily recognized by other pathologists. The histologic grades correlated with the varying degrees of clinical malignancy of the cancers. Because the Gleason grading system was easily learned from the drawings, it has been accepted and applied to the diagnosis and treatment of prostate cancer around the world.

Dr. Gleason retired from the VA in 1976 and spent ten years as staff pathologist in the Fairview Hospital system, Minneapolis, before his final retirement in 1986. In 2002, he received the honorary Presidential citation from the AUA. He passed away in 2009.