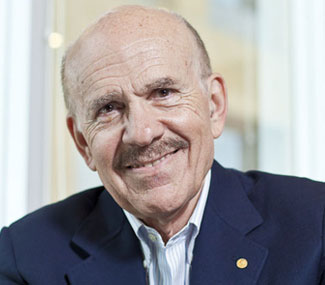 Louis Ignarro spent the first two decades of his life in Long Beach, New York City where his family settled after immigrating from Italy in the 1920s. During his youth, he enjoyed building enormous sand castles, and all of his friends predicted he would become an engineer or architect. Early in his life, his parents bought him a coveted chemistry set, and he loved conducting successful experiments. Ignarro eventually went on to study Pharmacy and Chemistry at Columbia University in New York City.

Throughout his undergraduate years, he contemplated a career of rebuilding race cars at the West Hampton Drag Raceway, until he decided instead to apply and attend graduate school at the University of Minnesota for Pharmacology.

While working on his thesis, Ignarro submitted four separate manuscripts on his research to the Journal of Pharmacology and Experimental Therapeutics, which accepted all his work and published them back-to-back in a single issue of the journal, which had never been done before.

When Ignarro moved to New Orleans to continue intensive research, he took a deeper look into blood vessels after reading a compelling article by Ferid Murad and fellow researchers.

For more information on the work that resulted in Louis J. Ignarro and two other American scientists being awarded the Nobel Prize in the Physiology of Medicine in 1998, see www.nobelprize.org/prizes/medicine/1998/ignarro/facts/