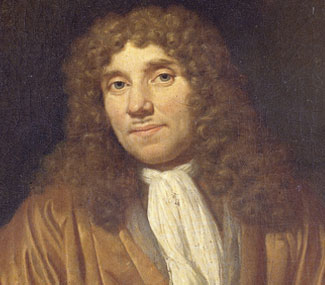 A draper and part time minor town official, Antoni van Leeuwenhoek created a single, small (1 mm diameter) ocular that could magnify about 250X. Leeuwenhoek had read Robert Hooke's Micrographia (published 1665) and began his own contributions to the Royal Society in 1673. His contributions include the first description of spermatozoa, the understanding that fertilization occurs by the sperm entering the egg cell, the first accurate description of RBCs, and the first descriptions of bacteria:

"This pepper having lain about 3 weeks in the water, to which I had twice added some Snowwater, the other water being in part exhaled; I looked upon in the 24. of April 1676. and discern’d in it, to my great wonder, an incredible number of very little animals of divers kinds…"

The incredulity of microbial life had just been announced.

Leewenhoek even demonstrated anaerobic bacteria well before Pasteur on June 14, 1680; he created a closed anaerobic tube of water with living animalcules and expected to find nothing, yet " a kind of living animalcules that were round and bigger than the biggest sort that I have said were in the other water."

Leeuwenhoek is known to have made over 500 microscopes, of which fewer than ten have survived to the present day. In basic design, probably all of Leeuwenhoek's instruments were just powerful magnifying glasses, not compound microscopes (using more than one lens) such as were invented in 1595, almost 40 years before Leeuwenhoek was born. But because of technical difficulties, early compound microscopes were not practical for magnifying objects more than about twenty or thirty times. Leeuwenhoek's skill at grinding lenses, his naturally acute eyesight and care with lighting, enabled him to build microscopes that magnified over 200 times, with clearer and brighter images than any of his colleagues could achieve. He also hired an illustrator to make drawings of his observations to accompany his written descriptions.

Leeuwenhoek eventually became famous for his letters to the Royal Society detailing his observations, and he was elected a full member of the Society in 1680. He continued his observations until his death on August 30, 1723.