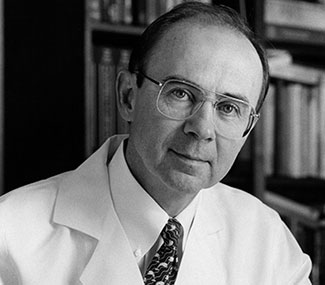 Patrick C. Walsh, MD born February 13, 1938 and raised in Akron, Ohio is the chair of urology at The Johns Hopkins University. Dr. Walsh received his medical degree from Case Western Reserve University in 1964, spent three years at Peter Bent Brigham Hospital and Boston's Children's Hospital as a resident in surgery and pediatric surgery and did his urology training at the University of California, Los Angeles from 1967 to 1971. He served at the Naval Hospital in San Diego as an assistant clinical professor of urology, and subsequently spent one year in endocrinology research at the University of Texas Southwestern Medical School in Dallas with Jean Wilson, MD

Dr. Walsh published the first description of 5-alpha reductase enzyme deficiency in 1974, providing the basic framework that led to the development of the 5-alpha reductase inhibitor for the treatment of benign prostatic hyperplastia (BPH). He wrote several papers on androgen receptors and the prostate and, in 1979, published his technique for the management of the dorsal vein complex during radical retropubic prostatectomy. Dr. Walsh's technique illustrated that patients who underwent radical retropubic prostatectomy did not always become impotent or incontinent. Later that year at a meeting of the Genito-Urinary Surgeons, Dr. Walsh met Pieter Doncker, MD, the outgoing chair of urology in Leiden, Netherlands. They maintained contact and, in 1981, Dr. Walsh attended a conference in Leiden and worked with Dr. Doncker to dissect the pelvic nerves of an infant. They spent three hours tracing the nerves to the corpora cavernosa and observed that they were located outside the capsule and fascia of the prostate, and showed that the nerves traveled in a cluster of arteries and veins of the prostate. On April 26, 1982, Walsh performed the first purposeful nerve-sparing radical prostatectomy on a 52-year old patient who reported seven months later that he was potent.

In 1980, only seven percent of men with localized prostate cancer underwent radical prostatectomy for fear of incontinence and loss of potency; 18 radical prostatectomies had been performed that year at the Brady Institute. In the year 2000, 1,000 radical prostatectomies were performed at Hopkins. Walsh, in a letter to his staff, went on to say "I share all of this with you not to take any major credit. Rather, I share these thoughts so that you can understand how important discoveries can be made—a simple act of kindness to a lonely old man [Dr. Doncker], followed four years later by trying to understand what he was doing now that he was retired. Never underestimate what you can learn from others."

His major accomplishment is that, through his meticulous dissection, he has dramatically decreased the fear of impotence, but much more so the fear of incontinence in men facing radical pelvic surgery. His work has stimulated many others to evaluate new approaches to prostate cancer.

Dr. Walsh, like his predecessors, has trained a number of eminent leaders in urology. Since 1978, when he himself received the AUA's Gold Cystoscope Award, five of the young men who trained under his stewardship and one of his faculty members have also received this award for outstanding contributions to urology. In 2004, Dr. Walsh received the AUA's  Hugh Hampton Young Award. His charisma, his fame and his skills have enabled him to create more than six endowed professorships in his department. Additionally, he actively supports his community, sharing his leadership skills and resources.