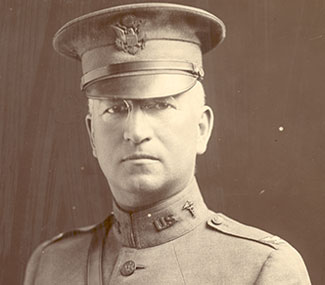 Hugh Hampton Young, MD was born in San Antonio, Texas in 1870. He attended the University of Virginia where in four years he received a bachelors, masters and medical degree by 1894. He returned to San Antonio to begin a surgical practice, but realized his limitations very quickly and decided to go to The Johns Hopkins Hospital for postgraduate education. Working in the surgical dispensary, he eventually obtained a position as a resident on the surgical wards. By 1897, three years after graduating from medical school, Dr. Halsted, the chief of surgery, asked Dr. Young to take charge of the Genitourinary Surgery Division. Thus began the career of the individual who is considered the "Father of American Urology."

Dr. Young remained at Hopkins and developed a number of innovative instruments and techniques. His first new instrument was the "punch" for blind resection of obstructing bladder neck and prostatic tissue, which led to the development of numerous other punches, particularly at the Mayo Clinic where several of his students perfected this instrument. Using the punch on a railroad entrepreneur by the name of James Buchanan "Diamond Jim" Brady, whom he relieved of his obstruction in 1912, convinced Brady to fund the construction and creation of the Brady Urological Institute. There, Dr. Young designed a urological operating table and developed a detailed approach to perform radical perineal prostatectomy which became the standard for prostate cancer surgery (1904).

In 1926 Dr. Young published "Young's Practice of Urology." A pioneer in hermaphroditism and related diseases, he published: "Genital Abnormalities, Hermaphroditism, and Related Adrenal Diseases" in 1937. He wrote about mercurochrome as an intravenous antiseptic agent and extensively tested and wrote about sulphanilamide in the treatment of venereal disease. In 1917, he founded The Journal of Urology® which he edited until his death in 1945. He was and still remains the longest serving Editor over the Journal's more than 100 years in publication.

Dr. Young created a detailed plan for the training of young urologists; his program became the model for all other training programs in the United States.

Dr. Young was a prolific writer, frequent guest speaker at national and international meetings, researcher, educator and surgeon. Nevertheless, he still found time to pursue numerous other interests in the realm of the arts: seeking funds and land for the creation of a museum in Baltimore, chairing a fund drive to save the symphony house which was on the auction block, promoting legislation for better care and better facilities for "insane asylums," and spearheading the construction of a bridge across the Potomac.

While recuperating from a herpes zoster infection in 1940, Dr. Young dictated his last major book: "Hugh Young: A Surgeon's Autobiography." He died after several heart attacks in 1945 in Baltimore.