For the first time in history, there was a tie for the 2019 AUA Earl Nation Retrospectroscope Award. The award, presented to the best paper and presentation from the History Forum, was given to both Dr. Simone Vernez and Dr. Sara Best for their paper on “Liquid Gold: The Value of Urine in the Textile Industry” and Dr. Michael Witthaus and Dr. Ronald Rabinowitz for their paper “Stones, Space, and Abraham T.K. Cockett: A History of Urolithiasis and Aerospace Medicine.” 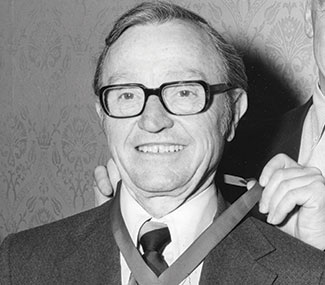 Earl F. Nation, MD, served as president of the American Urological Association in 1977.

Drs. Vernez and Best’s unique paper studied the use of urine in the history of the textile industry and the authors even performed a primitive experiment trying to dye textile with one of the author’s urine! Drs. Witthaus and Rabinowitz’s paper was timely in that it was presented close to the 50th Anniversary of the Apollo 11 lunar landing and studied the urologic contributions to aerospace medicine of Dr. Abraham Cockett, former AUA President and Chairman of the Department of Urology at the University of Rochester.

Honorable Mention was awarded to the paper by Dr. Jubin Matloubieh and Dr. Ronald Rabinowitz titled “Blood Gushing and Musical Screaming in Marin Marais’ Cystolithotomy.” During Dr. Matloubieh’s presentation he played Marin Marais’ musical work “Portrait of the Bladder Stone Operation” on the viola. The work, which was written by Marais in 1725 in the court of Louis XIV, the Sun King, musically describes the steps of the lithotomy procedure likely performed by Francois Collot who treated members of Louis XIV family.

Learn more about the past awardees.