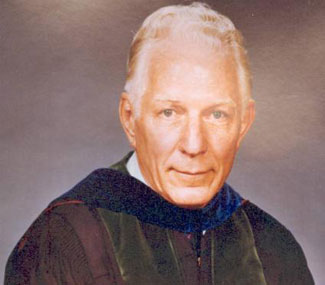 William Wallace Scott, MD (1913 - 2000) was born in Kansas City, Kansas, on January 27, 1913. He attended the University of Missouri at Columbia for four years and supported himself by driving a cleaning and pressing truck for Vanity Fair and working in the Sigma Nu fraternity house. Early in college, Dr. Scott aspired to become an engineer. However, after working in the research laboratory at the University of Chicago during the summer of 1932 and being exposed to his older brothers—one a physiology student and the other a medical student, he was convinced that a career in physiology or medicine was for him. Consequently, he began medical school at the University of Chicago in the fall of 1934.

Dr. Scott received the Sydney Walker III Fellowship, which paid tuition for the final years of his schooling. This included graduate work culminating in a PhD in physiology in 1938 and an MD in 1939. After the first two years in medical school, during which he took all the electives in physiology and biochemistry, Dr. Scott decided to follow in his two brothers' footsteps and work toward a doctorate in physiology. His doctoral thesis was "The Physiology of Cerebral Concussion," and for a time he considered going into neurosurgery. However, after he obtained his medical degree and interned in surgery under Dallas B. Phemister, MD, a strange set of circumstances pushed him toward urology. Dr. Scott worked with Charles Huggins, MD and later became his resident and associate. Dr. Scott's experiences with Dr. Huggins convinced him that he wanted to pursue a life in urological surgery and research.

Aside from his work on the prostate gland, Dr. Scott had an interest in renal transplantation. In the early 1950s he was the first—with Johan de Klerk, MD and H. William Scott, MD—to use cortisone in an effort to increase the length of survival of heterologous renal transplants in dogs.

In Dr. Scott's 1965 presidential address to the Mid-Atlantic Section of the American Urological Association, he spoke on "The Training of a Resident" (unpublished). Much of what he said was to point out that a year in research during a clinical residency was very worthwhile, regardless of whether the trainee subsequently pursued a career in academic medicine or private practice. It was extremely gratifying to Scott that 22 of 65 of the residents training during his tenure later went on to head departments of urology in medical schools here and abroad.

During his tenure, Dr. Scott gave 15 named lectures and participated in 25 visiting professorships. Among the lectures, he was most honored to give the Austin M. Curtis Memorial Lecture at Howard University, the first Nathan G. Alcock Lecture at the University of Iowa, the Ramon Guiteras Lecture, the Dallas B. Phemister Lecture and the Hugh Hampton Young Lecture. In addition to keeping busy with the affairs of the Brady Urologic Institute, Dr. Scott also served the faculty committees of the School of Medicine at Johns Hopkins and the National Institutes of Health and Armed Forces in Washington, DC.

Scott received numerous awards. These included sharing the Gold Medal for Research in Prostatic Growth with Charles Huggins and Phillip Clark, presented in New York City in 1940 by the American Medical Association; the Distinguished Service Award of the university of Chicago in 1958; both the Barringer and Keyes medals of the American Association of Genito-Urinary Surgeons; the  Ramon Guiteras Award* and the  Eugene Fuller Triennial Award* of the AUA; and an honorary Doctor of Science degree from the University of Missouri. He served as president of the Mid-Atlantic Section of the AUA in 1965 and of both the Clinical Society of Genito-Urinary Surgeons and the American Association of Genito-Urinary Surgeons in 1974 and 1978, respectively, and was an honorary member of several of the sections of the AUA and of the British Association of Urological Surgeons.