The practice of lithotomy—or cutting for the stone—dates back to antiquity and appears in records from societies such as the ancient Greeks, Chinese, Persians and Egyptians. The Hippocratic Oath, which appears in the 5th century B.C., even makes mention of the practice as it separates physicians from surgeons. "I will not cut," reads the medical mantra, "I will not cut, not even sufferers from stone, but I will give place to workmen who engage in this practice."

In the Middle Ages, despite the fact that physicians adhered to the oath and did not "cut for the stone," lithotomy flourished. No one ever needed mercy quite like a stone sufferer facing a lithotomist's knife. As if the substitution of anesthesia and antiseptic surgery for ropes and opium weren't enough, factor in an often poorly trained itinerant practitioner and the fact that the surgery was often done in a public setting—and the pain and humiliation of the patient are clear, as are the lengths a patient would go to receive treatment for this often-painful condition. Frère Jacques Beaulieu—who became a monk and traveled the French countryside performing lithotomy for nominal fees and often proffered those funds to the poor—was the first to practice a lateral approach to perineal lithotomy. Frère Jacques performed more than 5,000 lithotomies in 30 years, though his mortality rates were quite high. He was one of the most celebrated lithotomists of his time, and his name lives on in children's song.

Thankfully, the evolution of lithotomy and stone treatments has been vast. Today new technology—lithotripsy—has radically transformed treatment by pulverizing stones with powerful bursts of energy. Yet before it emerged, urologists witnessed an evolution of surgical and other techniques.

Civiale pioneered the theory that stones could be crushed, and he made the first successful attempt to crush calculi by passing a steel tube through the male urethra into the bladder, grasping the stone with three-pronged pincers, and pulverizing it with a drill. Fellow Frenchman James Leroy d'Etiolles produced a similar model in 1822 while Baron L.S. Heurteloup introduced a long instrument with "jaws" to break stones a decade later. 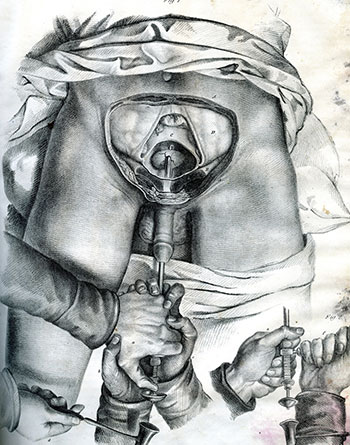 Lithotriptor with Key, Designed and produced by Charriere

Civiale's instrument lowered mortality to 3 percent. But it was Boston surgeon Henry J. Bigelow who introduced major safety features in his 1872 litholapaxy—which crushed the stone and flushed it out of the bladder in one procedure—and humane stone extractions. Witnessing the first public demonstration of ether anesthesia in 1842, Bigelow eventually applied it to his stone patients, taking up to two hours for his extractions. While ether ushered in powerful instruments and forceful evacuations, it also lowered complications and death.

But the bigger impact was in ending the taboo against renal or kidney surgery. German Gustav Simon performed the first nephrectomy on August 2, 1869 for a uretero-cutaneous fistula. While the surgery took only 40 minutes, patient Margarete Kleb's infection-riddled recuperation lasted six months. Kleb survived, exposing her incision in one of medicine's best known illustrations.

Nephrectomies for stone disease didn't catch on immediately. Physicians were handicapped by infections, insufficient diagnostic tests and limited knowledge of physiology or renal function. Simon's first nephrectomy for stones in 1871, for instance, ended with his patient's death from sepsis.

Yet, outcomes improved as X-rays and the cystoscope allowed urologists to locate calculi and visualize procedures. Surgery became well-established because of better techniques, a fuller understanding of anatomy and the advent of antiseptics and antibiotics.

By the 1970s, however, less-invasive techniques overtook open operations, with "big" stone surgeries involving gentler percutaneous approaches. Dr Arthur Smith would usher in the new field of “endourology,” a term he would coin to describe a closed, controlled manipulation of the genitourinary tract. Today, kidney stone patients, should they require surgery, experience smaller incisions, shorter hospital stays and smoother recoveries.

Another remarkable breakthrough is the development of extracorporeal shock wave lithotripsy, (ESWL). Pioneered by Dr Christian Chaussy in the early 1980s, ESWL utilized shock waves traveling through water and soft tissue to crumble the targeted calculus into sand-like particles that are flushed out naturally. 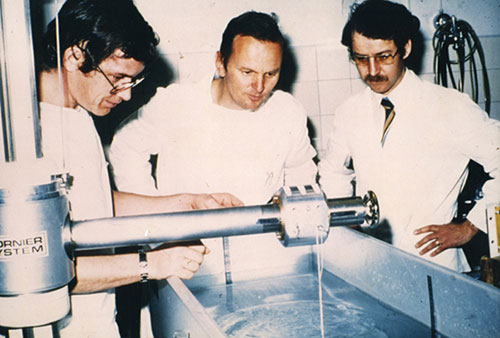 Chaussy, Eisenberger and Forssman
at work on the Shockwave Lithotriptor

Though ESWL remains a well-tolerated outpatient procedure, it is not the only approach to stone treatment. Ureteroscopy has allowed us to traverse the ureter to treat both ureteral and renal stones. Since the 1980s, ultrasound, laser and electrohydraulic lithotripsy have allowed great versatility in targeting calculi, based on size and site. Unlike ESWL, these modes require energy-transmitting probes to make contact with stones.

Advancements in optics, from the evolution of rigid glass lens scopes to the introduction of fiberoptics in the 1960s to the development of charged couple devices (CCDs), helped to further miniaturize the instruments used to treat stones. While advancements in radiology, from the development of fluoroscopy for intraoperative navigation and computed tomography for preoperative planning and diagnosis, also played significant roles in allowing urologists to better treat stone disease.

While research continues, urologists have ever-evolving techniques to make calculi successfully treatable. Even more comforting is the fact that today's options are light years from those early lithotomists and their "cutting for the stone."