In the early 1900s, the outlook was grim in general for a patient with prostate cancer, much less one who had failed conventional treatment. But today, alternative therapy is available to patients who have failed traditional treatments: hormone therapy. Now, thanks to all of these new treatments, sufferers can bask in the hope, if not the reality, of a cure.

The greatest advance in the management of prostate cancer was made by Dr Charles C. Huggins (AUA President 1948 – 1949) and Clarence V. Hodges who observed that castrated dogs’ prostates would decrease in volume. 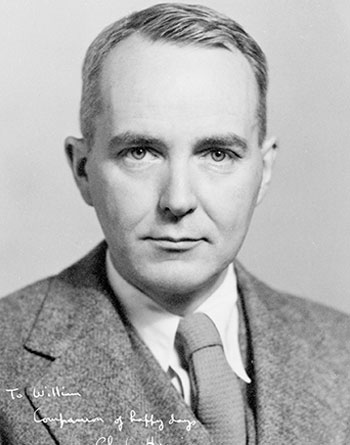 Huggins, with Hodges, R.E. Stevens Jr. and William W. Scott, confirmed that malignant prostate cells had a similar dependence on hormones. Castration and/or doses of the female hormone estrogen could slow or retard tumor growth. In studies yielding remarkably good results, more than one-half of advanced prostate cancer patients saw their tumors shrink. By administering non-toxic, naturally-occurring hormones, Huggins had produced a new therapy, a revoluationary change in the way men’s lives could be prolonged. His epic discovery earned him the Nobel Prize in 1966. But the true beneficiaries were the gravely-ill patients who, with no previous recourse, now had temporary, symptomatic relief. Based on its power to counteract testosterone, estrogen therapy emerged quickly after Huggins' successes. But by the early 1970s multi-center studies documented that men on high doses of estrogens (unlike those undergoing orchiectomy, or testicle removal) had significantly higher non-cancer death rates. Fortunately, by dropping dosages, urologists could retard the tumors without risking the accompanying heart problems.

Today, synthetic LH-RH (luteinizing hormone-releasing hormone) agonists (which block the production of testosterone) and LH-RH blockers (which prevent LHRH release) are the medical mainstay for advanced cancer. Since the 1980s, injectable drugs such as leuprolide acetate and degeralex are administered to shut down testosterone production. In the interim, oral androgen-blocking agents, such as flutamide and bicalutamide, boost the overall effect by preventing testosterone from attaching to prostate cells. Together, these medications bring dramatic, even miraculous, improvements to quality of life.

Yet, they aren't a cure. Advanced cancer inevitably returns, causing cancer that had nearly vanished so encouragingly to creep back until improved health becomes fleeting. The cells at fault are other, hormone-resistant, cancer cells, not those responding brilliantly to the therapy.

Some of the most exciting bench-to-bedside research could eliminate advanced prostate cancer. New agents such as abitaterone (with prednisone) emerged in 2011 to provide relief to men who had developed castrate-resistant prostate cancer (CRPC). Soon enzalutamide (Xtandi) was pharmacologically created to inhibit a specific region of the androgen receptor. Chemotherapy has also become more refined and, thanks to the results of powerful studies like CHAARTED, men with CRPR may benefit from receiving chemotherapy earlier than in years past.

Angiogenesis inhibitors, for instance, hold great promise in starving tumors by cutting off their blood supply. Pioneered by Boston cancer researcher Judah Folkman, this theory is taking hold through the use of statin drugs. Likewise, gene therapy, which uses the body's own DNA like programmed computer chips, could net genetically-engineered "vaccines" and doctored viruses that target prostate cancer cells for search-and-destroy missions. In any case, physicians soon may have therapies that derail the disease long before Huggins's therapy is necessary. With science shedding new light on this old threat, their patients may bask in the reality, not just the hope, of a cure.