Urology has a number of white knights that have led crusades against many debilitating urologic disorders. But perhaps none is more heroic than those innovative surgeons who have led the way in treating prostate cancer. Without the pioneering spirit of a Theodore Billroth or a Hugh Hampton Young, who adapted their prostatectomies for malignancies, men with early tumors could not choose surgery as a treatment. Without the curiosity of a Patrick C. Walsh, who investigated the gland's anatomy and crafted nerve-sparing surgical techniques, they might still face the devastating side effects of previous operations. 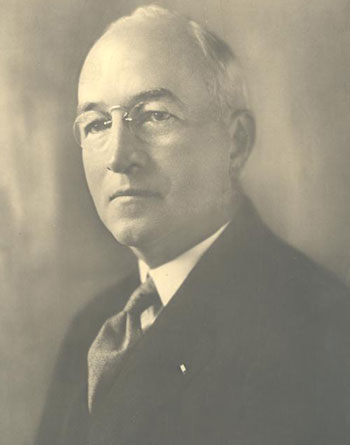 In fact, before Walsh debuted his revolutionary nerve-sparing radical prostatectomy in 1982, prostate cancer sufferers faced an unenviable choice: Undergo surgical removal of the gland and surrounding tissue but risk incontinence and impotence, or choose a treatment that spared the complications but didn't necessarily remove the disease completely. For most men, avoiding a radical prostatectomy in favor of radiation therapy was an easy decision, given the risks of such debilitating surgery. Only seven percent of sufferers opted for it. But today, more than a third of those eligible for the procedure undergo it, most surviving with both erectile function and urinary control intact. Yet long before this standard-of-care turned the tables on side effects, other surgeons would lay the groundwork. Vienna's Billroth boldly ventured into unknown territory when attempting the first radical perineal prostatectomy for cancer in 1867, entering through an incision in the perineum, between the rectum and scrotum.

But it was Johns Hopkins' Hugh Hampton Young—the "Father of American Urology"—who gave this approach staying power. Moved by his success with his perineal prostatectomy in treating patients with benign prostatic hyperplasia, Young leapt at the possibility that cancer could be cured if he extracted the entire prostate and its capsule, studied the prostate's anatomy and designed a surgical plan. 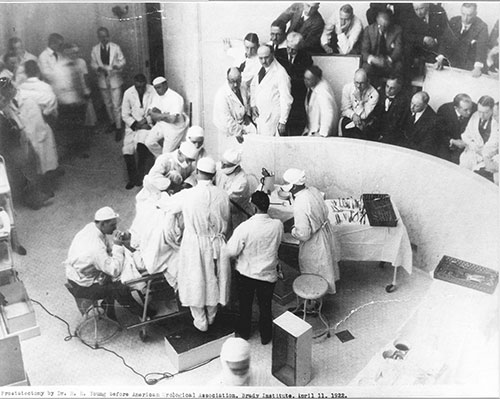 Young, the founder of The Journal of Urology® (the official journal of the AUA), performed his first cancer surgery on April 7, 1904, removing the gland and adjacent tissue of an elderly preacher. Young did achieve some cures, though many prostate malignancies of the time were already well-advanced when diagnosed. But his approach continues its long history. Only when Britain's Terence Millin touted his retropubic approach—essentially Young's operation through a lower abdominal incision rather than a perineal one—in 1945 did surgeons have a second choice.

Yet these options, particularly Millin's, were infamous for their side effects, which could be life-threatening when bleeding was profuse. Virtually all men became impotent; 15-25 percent suffered severe incontinence. Not surprising, by the 1950s doctors had turned to radiation therapy—in lieu of surgery—for its fewer complications, even if it didn't cure the disease.

Walsh put Young and Millin's approaches back on the treatment map by applying his nerve-sparing technique. By defining the periprostatic anatomy, he showed surgeons how they could remove the gland without disturbing the adjacent vessels, nerve bundles, and sphincter mechanisms.

Walsh first developed a safer, bloodless operation, netting better prostate views almost immediately. Yet it was his serendipitous collaboration with Dutch urologist, Pieter Donker, that triggered his groundbreaking techniques. At first, Walsh didn't see the relevance to his own research of dissecting stillborn infant cadavers to study bladder nerves, even though Donker was using the smaller anatomies for a cleaner view. But in scrutinizing a fetus on Feb. 13, 1981, Walsh proved the prostate's nerves were outside the gland, and could be preserved during surgery. Walsh performed his first successful nerve-sparing radical prostatectomy on April 26, 1982, removing the prostate of a 52-year-old psychology professor. The patient led a normal, cancer-free life.

Other urologists rapidly adopted Walsh's techniques in lieu of radiation and other treatment modalities. As more patients underwent surgery for prostate cancer, there was more surgical tissue to harvest, enabling pathologists to characterize the extent of the disease and eventually helping surgeons predict the probability of cure.

Open techniques shifted to minimally invasive techniques for prostatectomy. In 1999, urologists from the Montsouris Institute in Paris published their technique for laparoscopic radical prostatectomy, an approach which was previously felt to be too technically difficult to perform well. Shortly thereafter, robotic surgical platforms became available and many found that minimally invasive prostatectomy could be more easily performed using this approach, especially with regards to intracorporeal suturing. The advantages were a shorter period of convalescence and markedly reduced blood loss when compared to the open approach. As such, the robotic assisted radical prostatectomy underwent rapid adoption in the United States and today is the dominant method by which radical prostatectomy is performed.

Today, as surgeons fine-tune their techniques, scientists are using tissue harvested at surgery to move forward on all prostate cancer research fronts, even focusing on the genes that might trigger this disease. Their hope? Someday they'll be able to avoid surgery altogether by stopping the cancer before it can start.

In the meantime, prostate cancer sufferers are beholden to those noble surgeons who led a crusade against this deadly disease.